Angel Mancat Monday, the One and Only Fuzzy

Kitties!
Mommy here.
Do you remember Sweet Pea mentioning on Saturday that there was one more exciting thing that happened at the Katnip Lounge?  I'm here to tell you all about it! 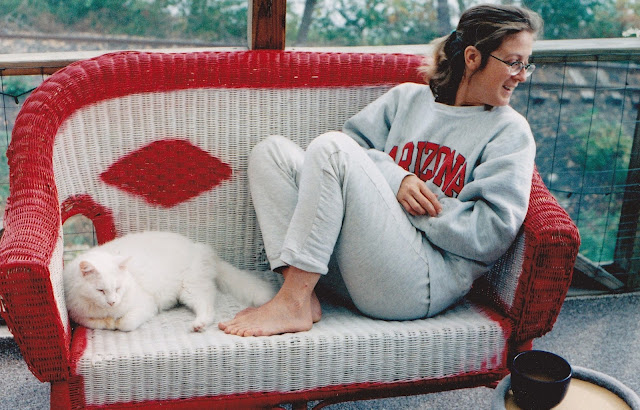 Do you see the handsome White Boy at my feet?  That was The Daddy's first ever cat, Fuzzy.  He came along with Scott when we got married, and he was Mister Purrsonality.  Fuzzy was given to Scott by an old girlfriend as a Christmas gift in the early 80's, he was a rescue and had a big red bow around his neck when Scott first saw him. 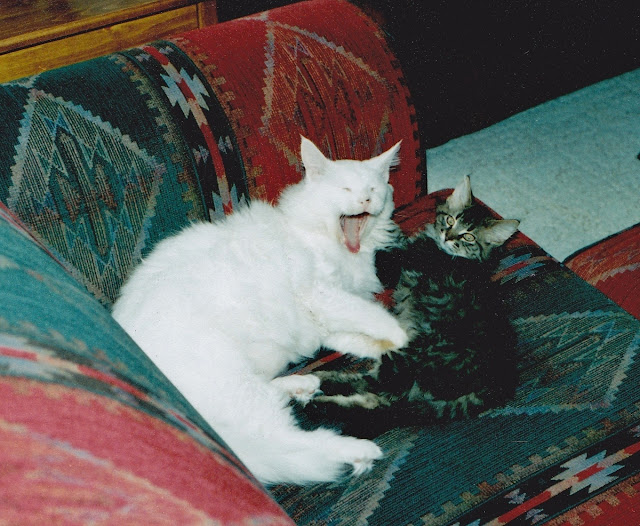 Fuzzy grew and grew and grew.  He never met a food he didn't like!
He was wonderful with all the cats we adopted, too.  Here he is with KonaKitty as a wee tot--she used to suckle on him and he'd purr up a storm. 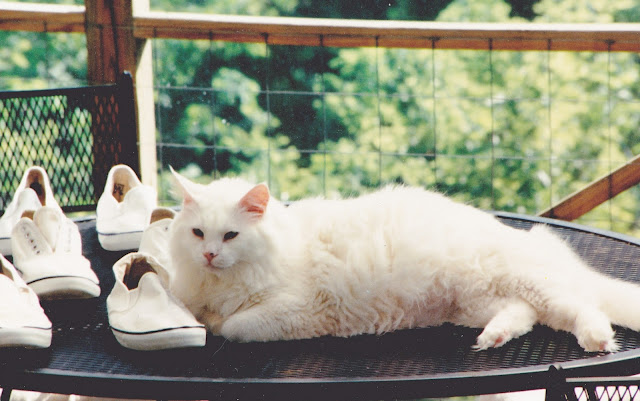 He loved shoes.  I used to work second shift and he'd wait for me at the top of the stairs when I got home, meowing for me to hurry up and take my boots off so he could rubrubrub on them; first one cheek, then the other.  We called his rubbing "sharpening", like a knife on a whetstone. 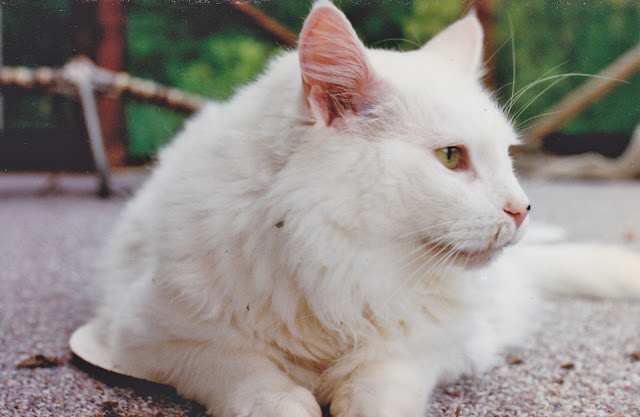 He was a burly ManCat, and loved to play--see the scratch on his muzzle?
His favorite game was to lay on his back, and Scott would slowly lower his hand to grab Fuzz...Fuzzy would get all excited and squeal and bunnykick like a madcat!
For such a big guy (18# at his biggest) he has the tinyest meow, it was a high pitched  "hit-eeew", emphasis on the ewww half. 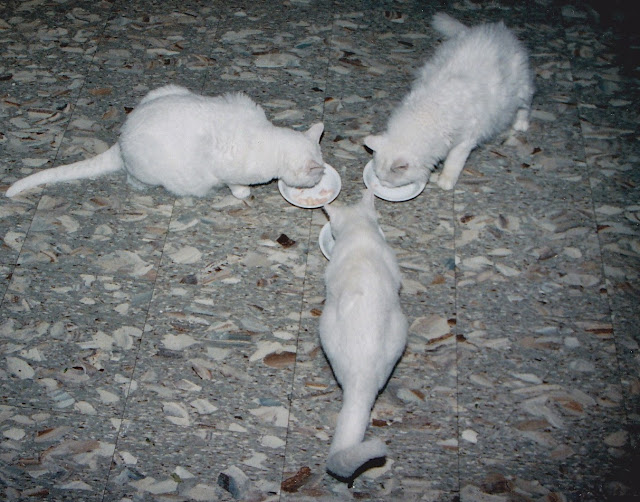 Fuzzy was the Original Whitester.  At one point we had three!  Fuzz is at one o'clock, The Baby at six, and Chuckles at nine.  (more about Chuck in another post)
You can see Fuzz was pretty thin and scruffy here.  He was an insulin dependent diabetic the last seven years of his life, and he was starting to fail in this picture.  I wish I had known then what I do now about cat nutrition, we would have been able to treat his condition better.  Nevertheless, Our Royal Fuzzmon lived 19 long years. 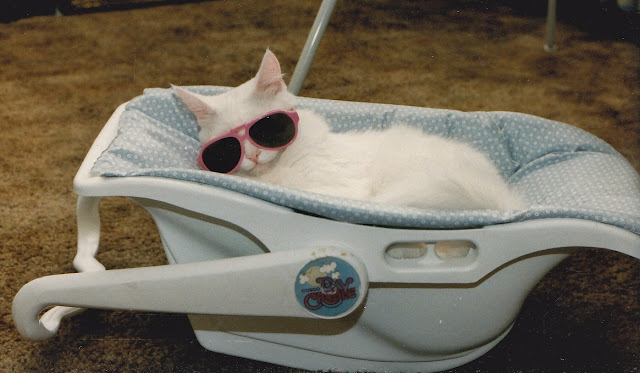 Fuzzy loved all people, even little sticky ones!
He was tolerant with Ashley and Aaron when they were little, he never bit or hissed.
He loved every lap ever made, and he was a huge bedtime snugglepuss. 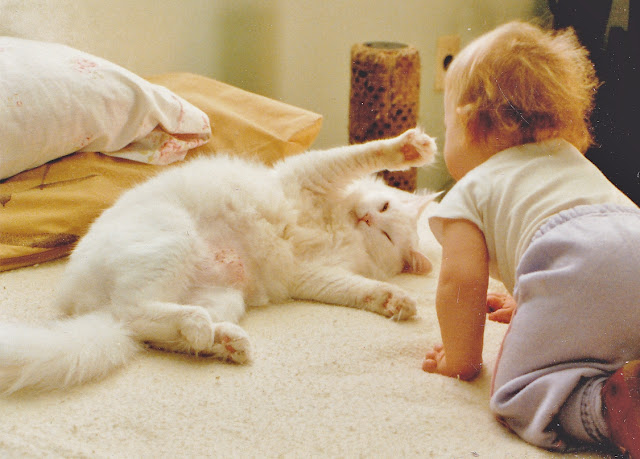 See his pink belly?  He used to suck on it and groom it bald.  Both the kids love animals as adults, Fuzzy (and the rest of the crew) taught them well. 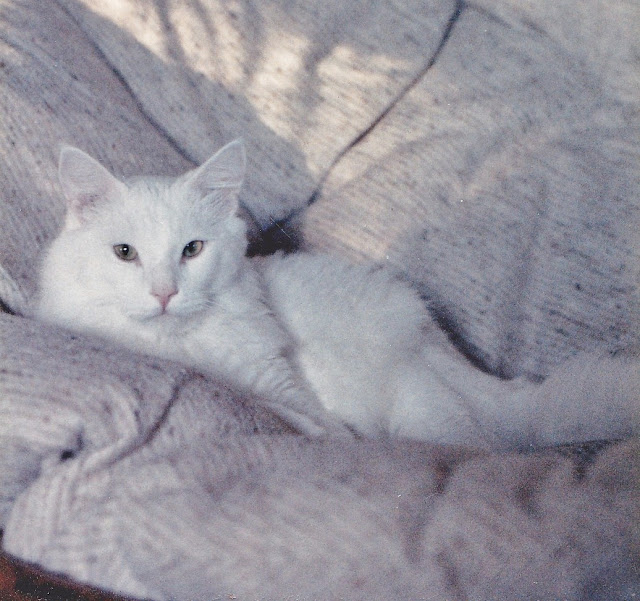 In this picture his nose is all pink--he got into a tussle one day (when he used to go out on a leash) and got swiped on the snooter.  After the scab fell off he had a black scar.
By the time Scott and I got married Fuzzy was an indoor cat, fleas and fighting put paid to his outside ways.  Not that he EVER stopped trying to escape...one memorable time he got out along with The Baby and they both were captured behind the barn, covered in mud!  Two baths and two wet cats later they were back to white again.  Oh, and we were throwing a dinner party when this happened.  So you see where The Baby learned her naughty ways.
I wanted to get Scott something special for our anniversary, so I decided to commission a painting of our Wonderful Whitester. 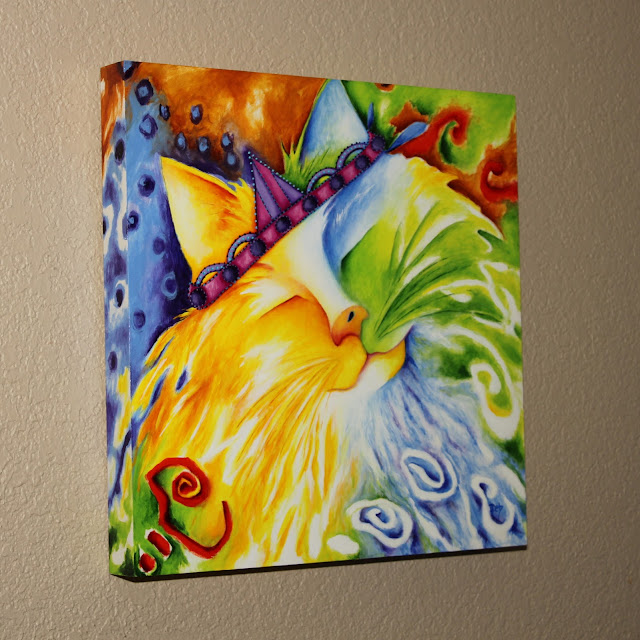 I worked with the wonderful artist Deb Harvey all summer, emailing back and forth, watching the progress. I was so excited and tempted to show him the painting, many times, but I managed to keep the secret! 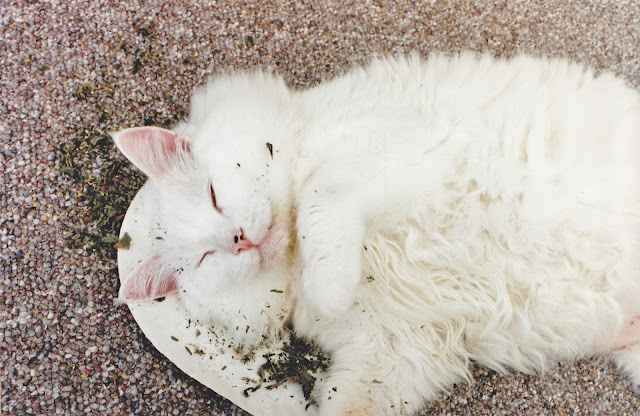 This is the photo Deb based the portrait on; Fuzzy is blissed out on the porch in a paper plate-full of catnip. 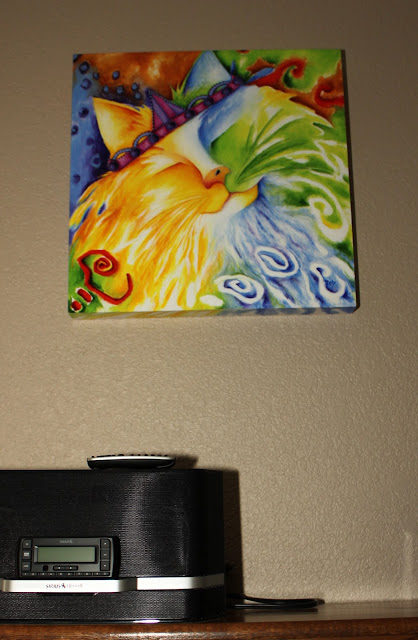 Scott cried when I gave it to him.
He said "the best gift is one you didn't even know you wanted until you got it". 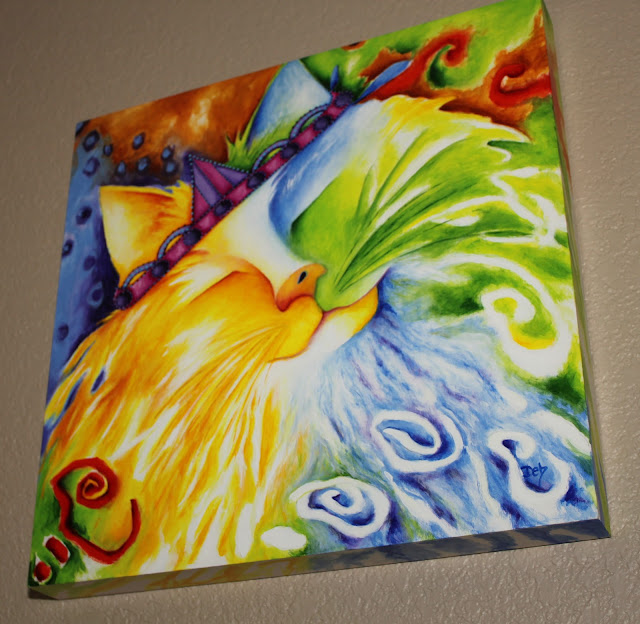 Our fabulous boy is hanging in Scott's office, where we can see him all day. 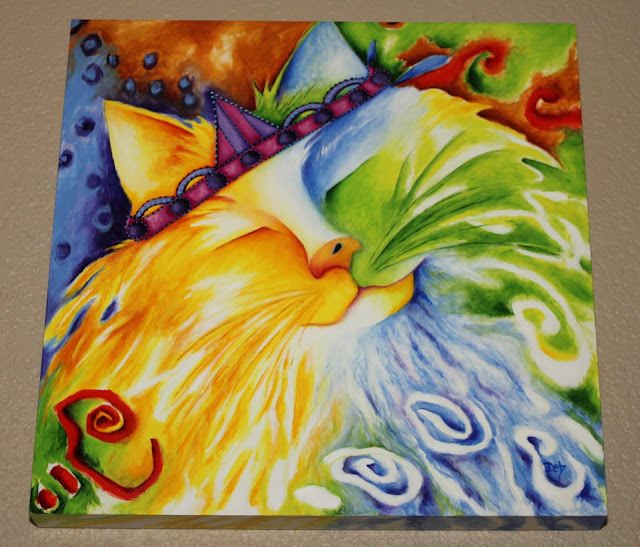 Thank you Deb, for your beautiful Art.
We love our Fuzzy Man.
And I love you, Scott.
Happy Anniversary.
XX  Mommy Trish  XX
Posted by Katnip Lounge at 12:05 AM