A Pictorial Sunday with Sheebie

Sheebie here, with the State of the Yard report. 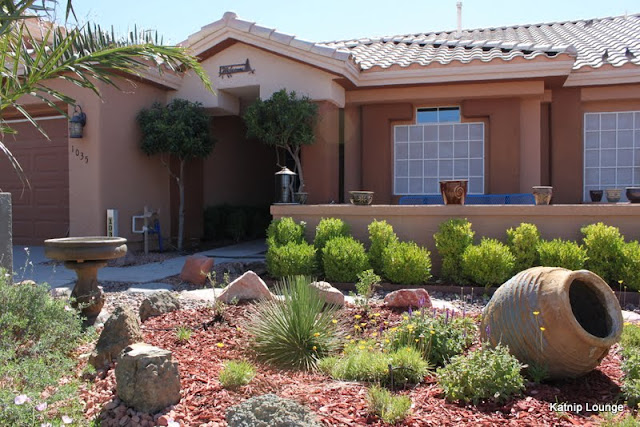 Do you see the two tree/bush thingies on either side of the entryway?  After the landscaper put them in we discovered that they were two different varieties.  This bugged Scott endlessly, and no matter how he pruned them he was never happy with how they looked.

I freely admit that most all the decorating decisions at my house are up to Scott.  I may pick paint colors and voice an opinion, but he's got a far better eye than I do for how things should "go".  (Which doesn't explain his cluttering prediliction, but whatever.) 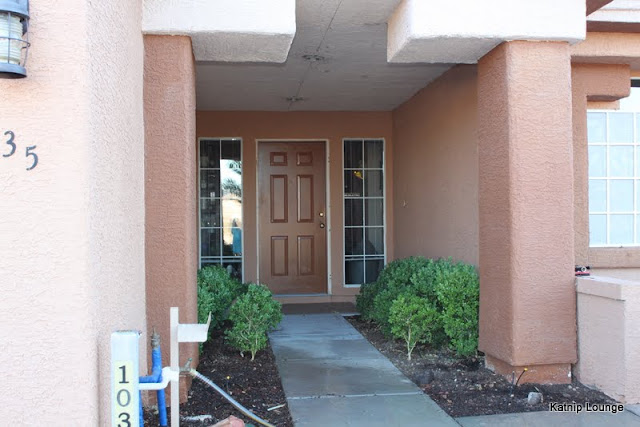 So I came home a few Saturdays ago, and the trees were gone!  This sort of project always happens on Saturday--we have Weird Garbage (our term) pickup every other Monday so a Saturday tear down allows for Sunday clean-up and Monday takeaway.

We lived with the nude look a few days, to see how we (Scott) liked it, and he decided he wanted an trellis archway over the walk for a creeping vine.  He also determined that the box plants in the foyer were not getting enough light from the Eastern exposure to thrive, and they were going to have to go.  Our neighbor took one box, but none of our friends wanted any, even when Scott offered to plant them.  Able to chop offending bushes down but unwilling to kill several innocent box plants, Scott had to devise a new scheme. 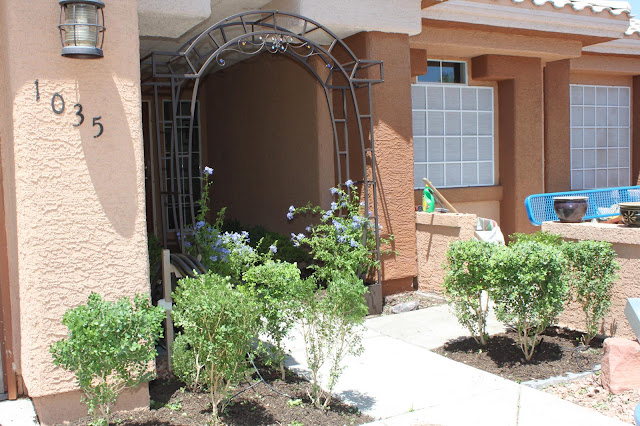 He decided to move some of the box plants forward to the empty front areas.  There are still some in the foyer, but they are doing okay for now--Scott's thinking of vinca or some other ground cover with low light requirements to grow in and around around the remaining plants. 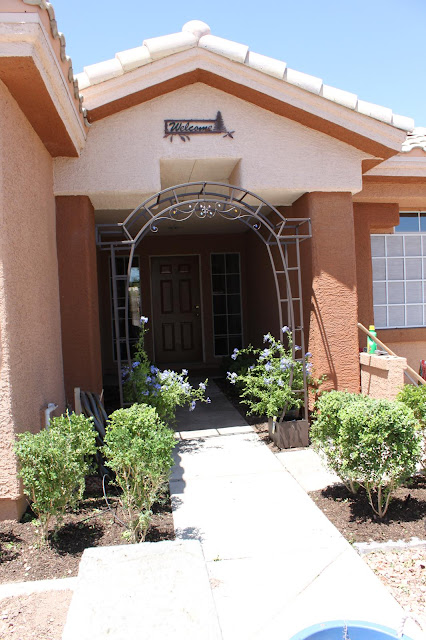 And he bought an arbor for the entryway!  He took the bottoms out of the planters (on the sides) and put plumbago directly in the ground.  It should fill in the arbor completely; and we hope it will flower most of the spring and summer. 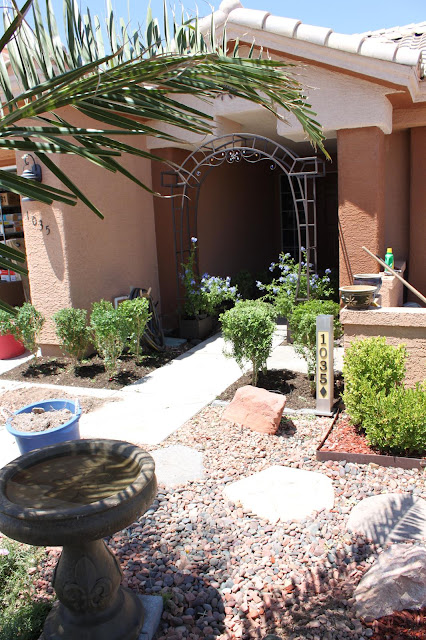 On the right you can see that there are box plants along the knee wall as well--they are a different species than the replanted ones, so they'll be different shades of green.

I promised to show you the progress with "our" park this week, but I got terrible photos.  There's no contrast between the concrete curbing and the desert soil (by design so it blends in) and I thought I'd wait another week and see how much further along it gets.  It appears that the roads are ready to be laid, and several pallets of bricks are on site for the rest area building.  I get to eye hunky construction men every morning, too!  Life is good.

The pigeon that we rescued last week did not survive.  Crystal took him home, and named him Golda (after our street).  He ate and drank and roosted--but the next day he was lethargic again and wobbly--and the next day he passed.  She thinks he may have sustained a head injury as he was in good shape physically.  We were all sad, but at least Golda wasn't bullied to death by the rest of his flock and had palliative care at the end.  Sometimes that's the best you can hope for with a wild animal rescue.

My Mom and Dad are in the Frisco Bay area this week--you west coasters keep an eye out for them.  They'll be the cute couple celebrating their 50th wedding anniversary!  The actual date is July 10th, and I'm flying down that day for a few days to visit.  They have all kinds of fun things lined up.  I swear, they wear me out.  Naturally my Mom will have some killer desserts for me and my Dad to eat as slowly as possible.  My newest strategy is going to be asking for a really large piece to get an edge through sheer volume.  I'll keep you posted.

Happy Sunday!
Have a good week everyone-