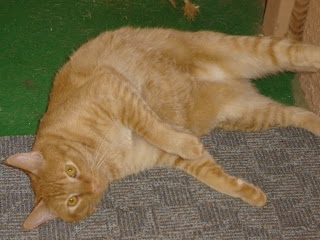 Here is Me, My Most Handsome Ornj Self. Note the fully furred left leg. This is how it is SUPPOSED to look! 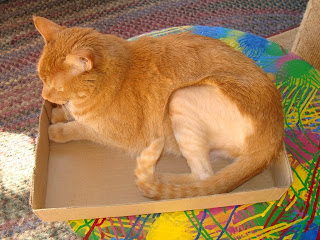 Never let anyone tell you bald is beautiful. All I know is that it's COLD! 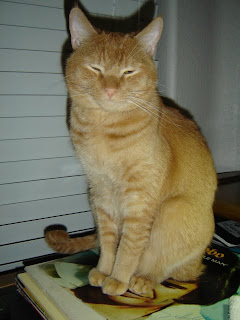 Some of my expert lace-making work. Daddy left this out by mistake...hahaha!

Felix: Mommy, tell the other cats about my knee. I don't like to talk about it.
Mommy: OK buddy. Well, about six weeks ago (on a Monday) I was changing the sheets on the big bed, nomally something Felix loves, and he stood up on the bed and howled and growled. I didn't think much of it; he's kinda cranky and ornj as a rule.
Felix: MOMMY!

Mommy: Well, big boy, it's true...ANYWAY...he did it again later, and then Daddy and I noticed he was limping on his left hind leg. We could manipulate it and his piddy pad and claws looked good so we decided to wait until the morning and decide if he needed the v-e-t or not. Felix slept all night but in the morning it was still the growl and limp show. Daddy works from home, so off to the the v-e-t they went--right away! The kind and gentle Dr. St John diagnosed a luxating patella and scheduled poor Felix for surgery that afternoon.


We picked him up that evening and boy, was he whipped out from the morphine and anesthesia. The pain patch probably added to the mix. I don't think the poor guy was in his right mind. It was kinda scary, actually. I cried a little bit. Daddy cried a little bit. We fixed up a room for him with a low bed and low-sided litter box and food and treats and a TV on for company, you know the drill. When the hallucinations (Felix's) finally stopped he pretty much slept for a day and a night. Then it was just the tempting him to eat and trying to restict him from moving around too much. And the litter box...try squatting with a stiff leg...not good. He picked out two of his stitches but otherwise left his incision alone.

After a few days he asked to go out of his room and gimped out to the catio to lay in the sun and do some general inspection of the house. We watched him to help if he wanted "up" or "down" and he was VERY aware of his lame leg. We could see him calculate how he was going to navigate where he wanted to go. Then he'd go back to "his" room when he got pooped out.

After another week he was sick of his room so he got sprung back into the general population. Felix has enough of a "rep" that the other cats steer clear when he hisses; he ain't kidding around! So we didn't worry he'd be harassed or chased, even Maui repects the Mighty Ornj Boy.

So now it's time for his recheck, and he goes back to see Dr St. John tomorrow. Felix likes her, considering she's a v-e-t and all...we're worried because he's still limping, but more so when he walks than any other gait. He's also gotten a little thin, but he's just as SASSY as he's ever been, so he must be feeling good. We need a professional opinion on his progress. I'm going to ask the vet about which joint supplements we should try (Thanks, Maggie May's Mommy!) and what else we can be doing to help Felix heal up as best he can.

As to how this injury happened, it's a mystery. Felix is incredibly athletic and I can see him careening around the catio and perhaps falling, or something falling onto him. That Monday morning one of the big cat scratchers was on it's side, maybe that had someting to do with it. Viewed from behind he always looked a little "knock-kneed" to me so perhaps he was genetically predisposed to an injury. Whatever. We just want our silly Ornj Boy back to 100%!

We're off to the v-e-t late tomorrow afternoon; I'll put an update up by Sunday. Purr for good news. Thanks!

Posted by Katnip Lounge at 9:16 AM