What Sheebie Did on Her Summer Vacation

First off, if you ever have the opportunity to take an e-cation I highly recommend it!  I only looked at my phone for email and to skim blogs (gotta keep up wit alla youse) for about a half hour each day, and watched a bit of TV (Da Bears, Survivor, and Big Bang Theory).  The laptop stayed firmly shut.  I do admit to reading several books on my Kindle...but I read some bound books, too, so cut me some slack.  The majority of my electronic interaction was rousting the lazy slow twitch fibers in my muscles, to wit: 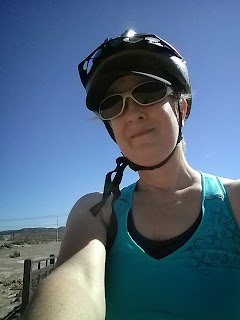 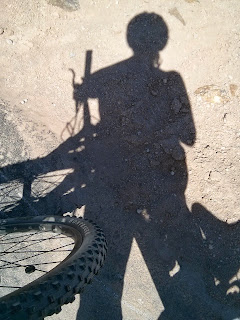 Yes indeedy, I'm back on my bike!  The knee feels great (except up really steep grades--nice excuse to walk and have a drink), and my left quads are at about 80% strength.  Descending stairs still is painful, but not physically difficult.  When I visited my folks (more on that later) Mom took me to two yoga classes which were fabulous, inspiring me to sign up through the City rec center for the next session starting in two weeks...during the MORNINGS!  Yep, you read that right, soonly I'm gonna be working afternoons--four days a week--WOOOHOOOOOOO!!!!!  OK, it won't start until the end of December, but still.  I'm pretending that the next few weeks are merely an unpleasant, if pesky, prelude to a new, grand world of Sleeping Until Eight O'Clock Every Morning.  My new hours'll be 13:00 - 23:00 on the days where my attendance is required at the totally raw deal money-for-labor-exchange work (F, Sa, Su & M).

Back to cycling, I have a personal question--what's the best way to prevent rash in *ahem* certain areas?  I find that after an hour a certain amount of chafing occurs betwixt my greater glutes!  Quite distracting...any solutions?  Also, do any of you use an app for tracking your workouts?  I'm using the free version of Runtastic's Road Bike and so far I like it, but I'm open to suggestions.

So I had a great visit with my Mom, Dad, and Shadow.  I haven't shared this until now but my Dad's prostate cancer recurred last spring and it was an emotional roller coaster for a while.  However, it looks as if he's got it licked--again--one more scan on his lung and he's in the clear.  His urologist said he expects my Dad to die from being run over by a bus before he expires from cancer...which struck me as morbidly, yet hilariously, reassuring.  They are both in fine fettle, Miss Shadow keeps 'em on their toes, chasing her throughout the house.  Kitties, expect to hear from her this week!

I don't think Dad noticed it--but I played the Dessert Game with him, and even allowed him to win once...Mom's apple pie was just too damn good to dawdle over.  I did some cooking for the P's while I was there, I made a dairy-less potato soup for lunch(es) and sauteed shrimp with baked kabota squash and a warm bacon, mushroom, & spinach salad for dinner.  Mom said it was weird, getting kicked out of her own kitchen.  Also, that I'm a "vigorous" cook.  She's so nice...what she meant was messy, although I do clean up after myself I have a tendency to fling peelings, etc everywhere while I cook.  In my defense, the Potato Paring Incident was a result of a faulty peeler, which was resolved during a shopping expedition.  (Always blame the tool, not the fool.)

We went out for a scrumptious lunch at a favorite restaurant:
where I had a pork fritter with sauteed spinach and mushrooms that was so good that when I got home I recreated it for Scott and he loved it too.  Since I broke my knee I've been eating a little more meat and I have to admit I feel less tired.  We have settled into a nice compromise of  moderate flesh consumption; more as a flavoring and condiment than as a main for every meal.  Scott fantasizes about a big juicy steak but he knows if he got one, he'd eat a couple bites and be done...and tear into the salad instead!  Funny how one's taste can change.

Mom and Dad took me to see a performance at their local live theater, and it was so much fun--it was the kind of performance where the audience gets to cheer the hero and boo the villain, and I've been promised another play the next time I visit!  The troupe was superb, and the venue was great, too; small tables (with complimentary bowls of popcorn!!), great lines of vision, and waitstaff in costume in the theme of the play.  Even a piano player, who before the show played old standards for everybody to sing along with. 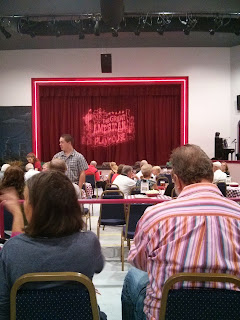 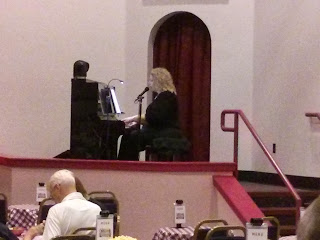 After six great days visiting I went home where, with the exception of riding and hiking, I was a complete and utter sloth for nine more days.  It was glorious!  This was the first time in twelve years that I've taken two consecutive weeks off work, and it was the Cat's Pajamas.  I'll be doing it again next year, that's for sure.  The Horde spent many happy hours with me, happily buzzing away on my lap while I read (and napped) on the Catio--the weather was perfect and I think some days I only went inside to get a fresh cuppa coffee.  Rupert in particular has become a complete Lap Fungus, dribbling copiously and clawtooing my hide every time I sat on the sofa; in fact I'm typing around him right now.

So naturally, I'm bursting with cat stories to tell...the Heinous Flypaper Assault springs to mind, but that's for another day...

Happy Monday, and have a Happy Week!