Thank Cod the week is over...

It's been the Week from Hell here at Casa Cerecke.
I'll spare you the gory details and just make a list:

1.  Scott went to the dentist a total of THREE times to clear up a gum infection caused by a stinkim' raspberry seed.  (He's on the mend.)

Q.  We had to replace the tires on the Explorer.

*.  The water softener went on the fritz.  Sears fixed it.

elebenty.  The plumbing under the kitchen sink is leaking.

12.  Scott tie dyed several items and something went wrong...let's just leave it at that...

9.  The water stain on the ceiling that we thought was caused by driving rain?
*WRONG*
Turns out our A/C condensate pan in the attic was completely rotted out...and our 22-year-old furnace is shot, and the A/C unit is ten years old.  We need a completely new system.  And a new ceiling, too.  Fortunately my folks are absolute stars and are footing the bill.  I'd like to publicly state for the record that my Mom and Dad are the BEST parents a rebellious neurotic daughter could have.  Ever.

Next week our house is gonna be a hive of activity.  Tuesday is the plumber, who is also going to hard pipe in the new deep sink in the garage.   Wednesday is the HVAC system, which means on Tuesday we need to move TONS of crap out of the walk-in closet so they installer dudes can get to the attic hatch.  Plus somewhere in there the insurance adjuster will turn up, and the guys for the solar panels (whole 'nother story) are coming to measure and do the prep work--also in the attic.

And, as if that's not enough to worry about, my step-daughter Ashley (who is an absolute peach) had back surgery on Thursday to remove the hardware in her spine.  She has had a persistent infection since her spinal fusion surgery a year ago--I can't go into details because there's a lawsuit pending--but we were worried about her, too.  She lives in Virginia with her husband so of course we can't just hop in the car and go see her, which is frustrating.  The preliminary reports are that she'll need IV antibiotics thru a PIC line for at least six weeks, and then reconstructive back surgery, eventually.  She's been pretty upbeat, considering; of course she's getting some pretty good drugs, too, LOL.

So, how about some Yellow-Headed Blackbird photos?
Scott shot a slew of 'em (in his bright shirt trying to be unobtrusive crouching in the driveway) and I'll be posting more later in the week for the Kats but here's a few fun ones: 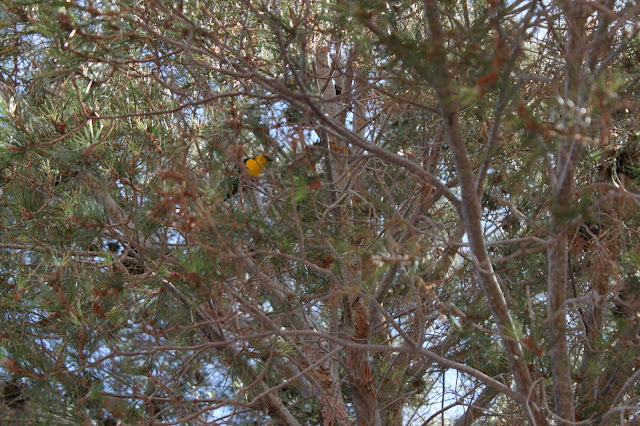 He's a pain in the butt!  Always hiding...do you see him? 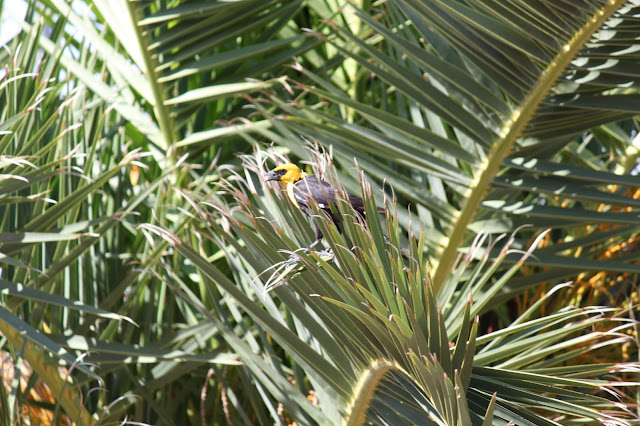 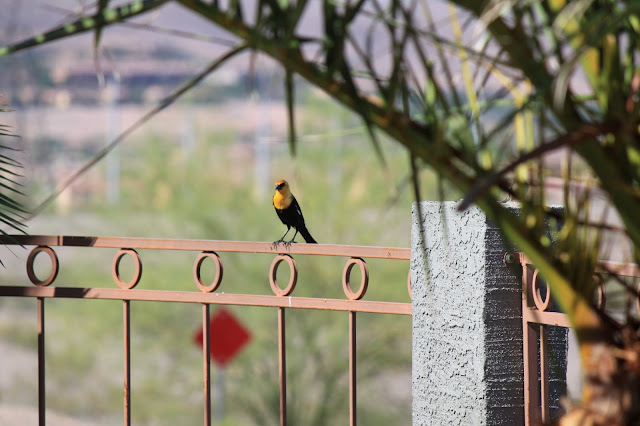 Finally, out in the open!

Scott counted as many as five males at one time, so we have a flock; I'll be interested to see if they remain.  We have the habitat they prefer; that is, if they don't mind staying at the Disaster House!
Thank goodness we have kitties to snorgle...

Happy Sunday, and may your week be Dull!