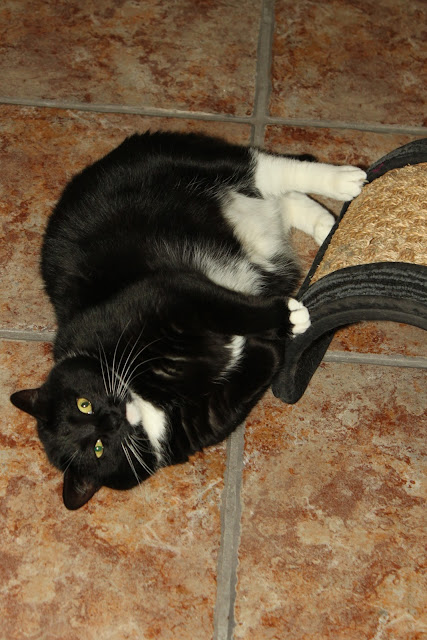 First off, let me say that everything is fine now, 100% all better...but it's been a wild ride around here health-wise the past couple of weeks.

Let's start at the beginning, shall we?

About three weeks ago there was an outbreak of the Prodigious Vomits--we were all yakking, all the time, everywhere.  Now, this coincided with a cold snap and a massive shed so Mommy put it down to hairballs, as historically this has been the case.  But this went on and On and ON...for a week...and then stopped.  Hallelujah.

A day or two later the Pernicious Squirts began.

Kitties, it was awful!!!  Some of us couldn't get to the box quickly enough and Mommy got to test her gag reflex more than once.  I was one of the worst affected, and Mommy thinks this is ultimately what irritated my "behindal" region into flaring up.

Thinking back, Mommy remembers getting up one morning a month ago and one of our food dishes had been completely untouched--which is unusual because we are little pigs.  She didn't think much of it and just left the dish down, and by the end of the day it was eaten.  Talking it over with Daddy he said that he had to toss a can of food that had a broken seal on it, and they think we must have been fed a bad can of food!  (We have some canned food delivered and one box came pretty banged up and odds are it contained the culprit.)  They felt terrible about it, and let me tell you they'll listen for a "pop" every single time they open a can from now until forever.

But if the barfs and the browns weren't bad enough, the worst was yet to come: Mommy put us on STARVATION RATIONS for 48 hours to let our tummies settle down!  We got only half the amount of normal wet food, a few measly Catio Chips (per kitteh) and a paltry serving of hand-shredded rotisserie chicken.  Oh, and Gerber's.  It was Pure Torture.

Moral of the story--have your peeps check every can and listen for the hiss when they pop the top!  Because half-rations are No Fun.