First off, here is what my poor husband has to endure, day in and day out...pandering to cats. 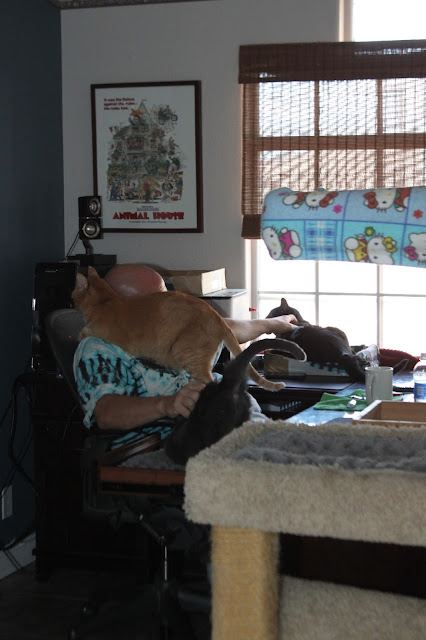 Back to front:  Sylvester, Felix, and Grayce (flashing her pink starfish).  Oh yeah, and Scott's in there somewhere.  Hint:  he's the one without fur.

So, stuff is plodding along here...we were delayed on the drywall repair which was actually a good thing, seeing how busy our week was.  One less ball to juggle = good.  Scott's pain wasn't too severe (as long as he takes his painkillers--stupid lug--he tries to go without because he doesn't want to get hooked) and he did some great work tie dying rainbow patterns and took a lot of new photos for his Etsy store.  He bought an extra-large sized mannequin for larger shirts and it's official name is "The Big Dummy" which naturally cracks us up every time!
Small minds...

The last time I visited my folks my Evil Dad showed me how to play Sudoku on his iPad.  Yes, previously I had to waste time in more pedestrian ways, like reading magazines, or scooping cat boxes.  I downloaded a Sudoku app to my Kindle Fire and stayed up far too late (night after night after night) solving puzzles.  After realizing I could load the app onto my phone, I played even more, everywhere.  Then Amazon sent me 500 coins for free to spend in the app store and my free time took an even sharper dive, because--Cod help me--I downloaded Bejeweled 2.

I am hooked on that !!@#%!! game.  I play it obsessively.  Help!
Is there a Bejeweled Anonymous?
Because I do not want to attend.  Ever.

There's big stuff shakin' at work; the new computer program that runs the water system is starting it's roll out for testing, with some (surprising, to us Operators) success.  It'll take several months to get it all going, but finally I'll be able to work in the new control room out at the Lake plant!  I'm excited, the current room is a dank cave with skanky gross carpeting and poor ventilation; nothing at all like the Henderson facility which is a joy to work at.  Um, "joy" might be overstating it...after all, it is work.  The other newsworthy work item is that we are rebidding shifts--I'm third in seniority--and I am going to take an afternoon shift.   I'm sick and tired of getting up early.  Mom says that even as a tot I hated getting up early and I still do--I cuss the alarm clock out every morning.  Not a good way to start the day.  I used to work afternoons at my old job and I loved it, and I'm looking forward to doing it again, hopefully starting around November 1st.  I don't think it'll impact my (and the Kats) blogging any, although it'll remain to be seen how time for commenting works out.  Lately three days a week is the norm for leaving witticisms although I read 200+ posts daily.
Because there's Bejeweled to be played!

Happy Sunday--do something FUN this week!